The health of our nation

he incidence of non-communicable diseases (NCDs) like cardiovascular disease (CVD), allergy, diabetes and obesity has rapidly increased over the past two decades becoming one of the leading causes of premature morbidity, disability and death globally4. The performance of the UK in terms of premature mortality is persistently and significantly below the mean of comparable countries5. In addition:

It is now believed that lifelong health is predominantly determined by environmental influences such as1:

Scientific evidence suggests that the environmental factors affecting an individual’s early life may influence their health in later life1,8 indicating that a more positive health outcome may be achieved by intervening as early as possible9. 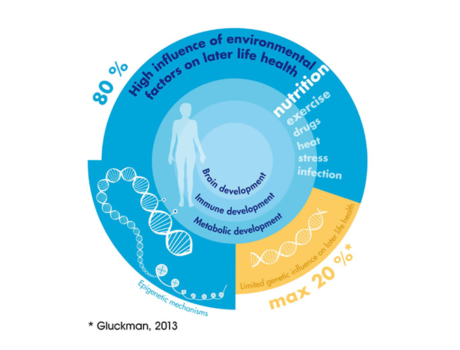 The individual’s ability to respond to their environment is known as ‘adaptive capacity’ or ‘plasticity’. It is thought that plasticity is at its greatest during the first 1000 days of life10 which is why environmental factors can also have the greatest effect during this period2,3. 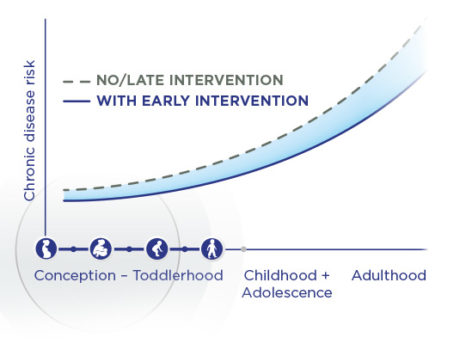 The prevalence of childhood obesity is increasing with 1 in 5 of 4-5 year olds in England being overweight/obese11.

The first 1,000 days: a window of opportunity

The first 1,000 days of an infant’s life, from conception until their second birthday, are key to determining their lifelong health12,13. This is when environmental factors – such as nutrition – can influence rapidly developing organs and body systems2,3.

The 1,000 Days partnership is a worldwide initiative that promotes positive action to improve the nutrition of mothers and their children during this critical period12,13.

Many environmental factors have an impact on later health, but diet and early life nutritional exposure are particularly significant2. By making the right nutritional choices from conception to toddlerhood, mothers can make a significant difference to their children’s long term health. There is a growing body of evidence that early life nutritional programming (ELNP) can affect both physiology and behaviour.

ELNP can affect both behaviour and physiology.

Healthcare professionals’ nutritional intervention from conception to toddlerhood may have a lifelong impact, supporting optimal health with the potential to positively influence long term health outcomes2,3.